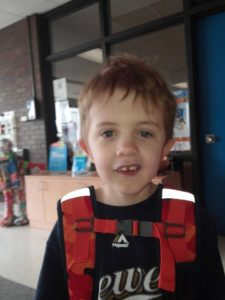 Jackson was born July 30th, 2004. He was 8 lbs, 1 oz and 20″ long.    Everything seemed to be going well except feeding. Jackson was taking anywhere from a half hour to 45 minutes to finish an ounce of formula. He was unable to latch to breastfeed because of a smaller lower jaw, but hospital staff told me it would come out on its own with continued feeding. I also noticed his left eyelid was droopy, but they told me that would resolve itself as well. Same story with his overlapping toes. I had a nagging feeling in the back of my head that something wasn’t right. Every time I voiced my concerns, I heard, “Oh, it’s just first time mom worries.”

At 3 weeks of age, after ongoing weight checks, he was still under his birth weight and continuing to have trouble feeding. His pediatrician diagnosed him failure to thrive and ordered a chromosomal karyotype because of the lack of weight gain and his ears “looking a little funny”.

We got a phone call from the pediatrician the Friday before Labor Day, 2004 with the news that Jackson’s results were back and he has trisomy 4p, inverted duplication. She told us he would never walk or talk, have seizures, organ issues and most likely be “severely mentally retarded.” I was then told, if I have further questions, I would have to wait and talk to the geneticist. I don’t think I have ever been so terrified in my life. I was home alone with Jackson and couldn’t believe she delivered this devastating news via phone call. I called my husband at work with what I had learned and he raced home.  He called the doctor back and asked for more information and she told him the same thing that we’d have to wait.  I tried to find any information I could on the internet and there was nothing.

The first appointment I could get with the geneticist was several weeks away, so we continued going to the pediatrician for ongoing weight checks.  Our next appointment was the Tuesday after Labor Day.  I asked her to give me any information she could because my internet search turned up nothing.  She photocopied a page from a medical textbook from the early 1970’s that said Jackson would most likely die from this condition.  I’m pretty sure she didn’t read the text before giving it to me.  I decided right there to find a more proactive pediatrician.  I found a new one with the help of my obstetrician and we have been with her ever since.

I felt much more hopeful for Jackson after our first visit to a Genetics clinic at Children’s Hospital of Wisconsin.  Dr. Bick and the genetic counselor took time with my husband and me to explain Jackson’s disorder and while they had never seen another child with trisomy 4p, they knew it wasn’t a death sentence.  They said they would help us and support us in any way they could. I felt like a huge weight had been lifted off my shoulders.  We wouldn’t have to do this alone. Jackson has been followed by Dr. Bick since that first visit in 2004.  It’s been reassuring to know that there is a place I can call with concerns or get help in finding the specialists we should see.

We have been lucky that Jackson has been relatively healthy, with no major medical concerns.  He has a g-tube for feeding and frequent croup episodes which result in hospital visits, but overall he’s doing well.  Jackson is walking and talking, he loves to read and spell and has quite a collection of garage door remote controls.  He loves school, playing with his brother and our two cats.  We feel very lucky to be Jackson’s parents.  He’s a pretty cool kid!