Our family’s story – Justin’s story – began when Justin was just four months old. He became upset and hard to comfort, sleeping only if I held him in my arms. When our pediatrician saw him the next morning, examination and testing didn’t show any reason for his fussiness. Although the pediatrician suspected an infection, two more exams over the next two days failed to really uncover what might be going on. 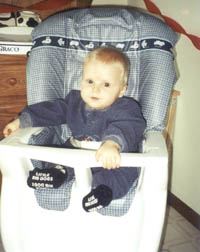 On the fifth day of his apparent illness, I noticed that Justin’s leg seemed hard and swollen and that he wouldn’t move it. Our pediatrician scheduled a CT scan, thinking that an infection might have moved into Justin’s leg bone. However, when we went to have this done, the radiologist looked at Justin’s leg, ordered an x ray and then informed us that Justin had a broken leg. Our nightmare had begun.

They took Justin to the ER. My husband, Bill, and I were upset and crying. An orthopedist asked us a lot of questions and asked that a skeletal survey be done. It showed that Justin had broken ribs, too. We knew then that there was something medically wrong with our baby, but we didn’t know what it was. And, everyone else seemed to think that he had been injured on purpose. Justin was taken to the operating room and we went to the waiting room…to wait. A police deputy arrived and asked us a series of questions. A social worker questioned Bill and me separately. The deputy questioned us again! The same questions, the same answers, but it was as if our answers weren’t satisfactory.

The next day, Bill and I were total wrecks. We were both crying. We were very anxious to see our own pediatrician. After all, he knew us, had taken care of our older son; he would make them understand that we really didn’t know how Justin got those broken bones. He didn’t say much at first. Then he told us that he would have to agree with the surgeon that the injuries were not accidental! I asked him if Justin could have a disease that caused this, and he said no. Bill and I were hysterical now. Bill asked our pediatrician what was going to happen now, “are they going to take my kids away?”. The pediatrician just said he didn’t know what was going to happen. It dawned on us that we were going to need legal help.

Later that day another social worker came by. She tried to act like she was our friend. She said that she had no kids but knew having two children can be stressful. She kept repeating that she was there to help us. Then she told us that she knew what we were going through. She had no idea! She had us sign some papers that said that a grandparent had to be present when Bill was home with our older son, Jason, or they were going to take him away and put him in a foster home. When she left we realized that we might lose our boys. What was to happen to our family? I was so upset and scared. All I could do was cry and hold Justin.

We arranged for protective custody in our home with grandparent supervision at all times. We had to agree. It was nearly time for Justin to be discharged and he had to be able to come home with us.

The detective came to visit again. He told us that things did not look good for us. He said we have a baby with multiple fractures and no explanation and that the doctors say that this is not a bone disease. He looked right into my eyes and stated that he knew one of us did this and that he thought he knew which one it was. He said he was willing to go to the DA and state that this person did this but now had remorse if one of us would admit that we had injured Justin. He told us that he had warrants for our arrest. I couldn’t believe what I was hearing. I was so scared. Arrested for something we didn’t do? Worse, all of these people thought we would purposely harm our baby. It was like a bad nightmare. When were we going to wake up?

When Justin was finally discharged, we all got to go home, but everything wasn’t just fine. In fact, nothing was fine. Our attorney had told Bill that someone might be doing jail time. Jason seemed frightened of us. I felt like I was falling apart. I remember that Bill got me into the shower and when he came to check on me, I was just sitting in the tub with the shower running over me. He helped me out. He took me to see our Pastor. I don’t remember much of the meeting with Pastor, but at some point that night I knew we had to fight to keep our family together. Somehow we had to find the help that our baby needed.

Bill’s sister had found information on the Internet about osteogenesis imperfecta. I could not believe what I was reading. Justin seemed to have all the symptoms and signs. Even though the doctors had told us Justin didn’t have a bone disease, we needed to get him to a specialist. I contacted a support group and through them got the name of such a specialist–Dr. Pauli, a geneticist in Madison. I called and talked with him, but it would be almost two weeks before he could see Justin. We lived in chaos for that time. Supervision at all times–what does that mean? Bill couldn’t even take Jason to Sunday School without a chaperone. When I nursed Justin, someone had to be there with us. Jason changed from his usual happy-go-lucky 3 year old and had his own times of crying.

When we went to the Clinical Genetics Center at the University of Wisconsin, Dr. Pauli wanted to hear our story. Then he examined Justin as best he could–mostly from the waist up since Justin was still in a spica cast. After that he told us that he was almost certain that Justin had osteogenesis imperfecta, probably type I. Both Bill and I began to cry again–partly from relief that we finally knew what was the matter with our baby and partly in fear of what that meant for our beautiful son. Dr. Pauli talked with us about safe handling of a baby like Justin. He wrote a letter for us to take home with us and told us that he hoped that it would help in our dealings with the social workers and the police. I honestly thought that everything would be dropped the next day. Little did I know! In fact, it was six more weeks before the abuse charges were fully dismissed.

A skin biopsy confirmed that Justin has type I osteogenesis imperfecta. Now we have to face the future of caring for a son with a disorder that places him at risk. It isn’t a happy thing to be told that your son has a problem that will affect him for the rest of his life, but we know that we’ll have the medical help we will need to care for him. Without the services of a geneticist like Dr. Pauli and the others at the Clinical Genetics Center who knows how this part of Justin’s story might have ended.