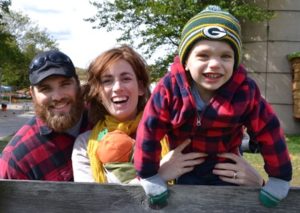 Luka was born on Wednesday, September 14th 2011 and we were sent home on Friday September 16th.  Within hours of having him home, we became concerned with his lack of interest in eating, irregular breathing patterns and overall lack of response to stimulation.

On Saturday 9/17 we took him to the walk-in to see a pediatrician who immediately arranged for an ambulance to take him to St. Mary’s hospital in Madison.  Almost simultaneously, his newborn screen came back indicating that he had some type of metabolic disorder.  Things were happening extremely fast.  Before transferring him to the American Family Children’s Hospital (AFCH), Luka was baptized and many prayers were shared.

Upon arrival to the AFCH, Luka was put on dialysis and many intrusive lines were placed. His ammonia level was 800, had uncontrolled hypotension, seizures, respiratory hypertension…it was overwhelming to say the least.

Sunday evening, he had a ‘respiratory hypertension crisis’ that drew the whole staff into his room as they struggled to figure out how to ‘bring him back’.  Miraculously they pulled him out of that mysterious ‘crash’ and he started to improve…slowly.  We remember feeling for days after, that it felt like we were all ‘chasing our tails’ with everything he had going on medically.

By September 19th, our Geneticist had shared that he thinks Luka was “through the hurricane, but there were still rough seas ahead”.  It was at this point that Luka’s dad, Ryan, placed a sign on Luka’s hospital door that said, “Please say something positive to Luka before exiting!”  It seems simple, but it ended up to be so powerful.

By the 20th Luka was officially diagnosed with Propionic Acidemia (PA). Luka’s Geneticist, Dr. Gregory Rice is like a superhero in our house.  He confidently lead the entire medical team in making decisions for Luka while gracefully educating our family and explaining each step along the way.  There were good days and bad days during our nearly month long stay at the children’s hospital.  On October 12th we finally arrived home with our beautiful baby, for the 2nd time.

Luka’s first year of life was, to say the least, turbulent.  About every other month we were hospitalized with some sort of ‘Fluka,’ as we called them.  These “Flukas” either started with acidosis or inevitably lead to an acidotic, very sick child.  In order to keep Luka metabolically ‘stable’ we discovered that Luka needed to be significantly overfed. He very quickly gained a lot of weight and was frequently vomiting.

In July of 2012 we found ourselves rushing a vomiting child to the hospital yet again.  We were surprised when the Geneticist told us that he thought Luka was a candidate for a liver transplant.  We remember it being mentioned in the hospital when he was first diagnosed, but at that time, it was a ‘worst case scenario’ decision that didn’t apply to Luka.

Dr. Rice had presented Luka’s case to several other doctors who specialize in working with metabolic disorders, specifically PA who were all in agreement that they would suggest a transplant for his case.  As a family, we did think very carefully about the decision, and felt confident in Dr. Rice’s recommendation.  We couldn’t imagine what Luka’s life would be like if we continued with the pattern he had shown in his first year of life.

Luka was put on the transplant list in August and his transplant occurred on October 26th 2012.  By the next day, his ammonia level had dropped to 40 (his ‘normal’ before that was 80) and no ketones were found in his urine.  On November 2nd, the geneticist brought us a print out of Luka’s amino acids.  He suggested we frame the sheet because all of the amino acids were in the normal range…something that had never happened for Luka before.

One of the first things we noticed about Luka when we got home after the transplant was how alert he seemed compared to before.  It was almost as if a fog had lifted and he was experiencing a version of the world that was so much more vivid and sharp.  The fridge would make a sound and he would turn his head quickly as if he had never heard that sound before.  He also seemed more engaged with each of us and purposeful when he played with toys.

As Luka continued to recover from the transplant, it was time to start talking about how to gradually introduce food.  There is no ‘prescribed’ approach to this, so we worked together with the team to determine how to allow Luka to become hungry while giving him sufficient calories and protein via his g-tube to make sure he stayed nourished and stable. It was a slow process, but we stayed focused on keeping our approach positive and eventually we started to see progress.

Luka has come such a long way since the transplant.  As of now, September 2014, Luka is allowed 21 grams of whole protein from foods he can eat orally.  We supplement his nutrition with 47 grams of propimex-2 given at meal times and in the evening through his g-tube.  Luka has grown to love food and has a surprisingly normal diet filled with fruits and vegetables.

Luka has been hospitalized a couple of times since the transplant.  What is significantly different about these hospitalizations is that he has remained metabolically stable each time.  We adjust his diet to a ‘sick day diet’ as a necessary precaution and he is still treated as a patient with PA, however, Dr. Rice is very pleased with how well Luka is doing metabolically.

Developmentally, Luka is doing exceptionally well.  Since the transplant, the fog has been lifted and he has not stopped taking in the world around him. He is much more active since the transplant as well.  Physically, he is running, going up and down stairs independently jumping and even starting to dabble on a tricycle!  As expected, his speech development took a bit more time and patience.  After eating became more natural for him and he was starting to use those muscles, he began to explore his voice.  It wasn’t until March of 2014 that he really started to talk… and he has NOT stopped since!  Luka loves to read books, play outside, ‘jam’ on his guitar with his daddy, and listen to music.  He is the best cuddler and spreads love and smiles everywhere he goes.  We are so blessed to have him in our lives.