It was evident that something was wrong with Owen as soon as he was born by cesarean on June 19th, 2007.  There was a NICU team standing by already because of abnormalities that our doctors had seen on prenatal ultrasounds.  He was not breathing on his own and had to be intubated shortly after his birth.  We learned later that there were other physical abnormalities that had his doctors very concerned like the way he held his thumbs clenched over his palms.  It was confirmed with an MRI that his diagnosis was Joubert Syndrome.  He had a molar tooth sign that showed up on the MRI of his brain, which is the classic finding in Joubert syndrome patients.  As the days went by and reality sunk in we realized that Owen’s case was very severe and that he would never have a normal life.  It was devastating for us to hear this about our firstborn, especially when he looked absolutely perfect in our eyes. 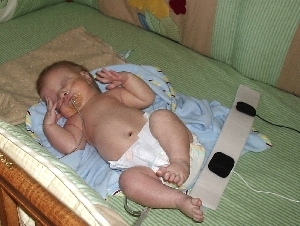 Owen stayed in the NICU for two weeks.  During that time, we met many wonderful people that were caring for him and helping us with decisions.  One of these people was a genetic counselor named Regan Veith.  She was very good at explaining Owen’s diagnosis and what it meant for our future.  We discussed how the features we saw on his physical examination and the molar tooth sign on MRI confirmed that Owen had Joubert syndrome. We also discussed DNA banking for genetic testing at that time and in the future.  At that time, there were only a few gene mutations known to cause Joubert syndrome. We discussed that many people with the diagnosis made by a geneticist (a clinical diagnosis) did not have a gene change that we could find with current DNA testing. There must be more genes that have not been discovered yet or are not able to be found with the tests available today.  We went ahead and had a blood sample drawn to use for the testing on the available genes and to save for future testing through DNA banking.

A few days later, we got to take Owen home. It was scary to deal with his oxygen, feeding tube and apnea monitor on our own but we were still so grateful to be able to have him home.  One week after he came home, Owen passed away.  Although it was not a total surprise, it was devastating.

A couple of months after Owen passed away, we got the results of the testing of the genes that we had started while he was in the hospital.  They all were negative.  The gene change that caused Owen’s Joubert syndrome was not one of the known genes.  We met with Regan again and discussed our results and options.  If we were to get a positive result at some point, we would have a couple of options for a future pregnancy.  We could consider in vitro using pre-implantation genetic testing to know if an embryo would have Joubert syndrome before implanting it.  We also could use a prenatal test called  chorionic villis sampling.  For this test the doctor takes cells from the placenta to test. These both sounded like better options for earlier testing than waiting until a 20 week ultrasound.  Unfortunately, we would have to wait until we had a positive DNA result for one of the genes before we could use these tests.  We knew that any pregnancy we had would have a 1 in 4 chance of being affected by Joubert syndrome.  A few weeks later, I found out I was pregnant again.   The odds were in our favor this time and we had a healthy baby girl.

We got so lucky to have a wonderful, healthy daughter, but we also have to consider her when approaching any future pregnancies and how it would affect her if we had another child with Joubert syndrome.  She also would be able have her DNA tested against the positive gene to see if she carries the gene for Joubert syndrome.    We are so glad that we were presented the option of DNA banking and we continue to keep in touch with Regan and use our banked DNA for any genetic testing that becomes available to us.  We are hopeful that one of the genes we test will be positive.