“Mom, what type of breast cancer did Aunt Barb die from?” It was my daughter Sue on the phone. I could tell by the tone of her voice that it was no casual question. When I asked her why she was asking, her voice trembled, “I found a lump in my breast.” 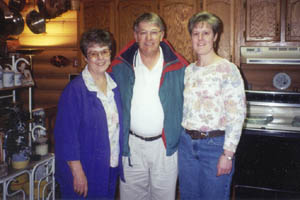 That was eight years ago and, at the time, my family knew little about the genetics of breast cancer. We just knew there seemed to be a “family link.” It wasn’t ever talked about much, but several of my aunts died from breast cancer. Barb, my sister, was diagnosed with the disease at age 39 and died at age 44. Now, my daughter too? Despite our family history, Sue’s doctors told her that she was too young at the age of 33 for mammography. Eventually we convinced the doctors that mammography and a biopsy were needed. Sue had cancer. My involvement with genetics started several years later when my primary physician cut my dose of Premarin, an estrogen replacement therapy drug. When I started having more and more severe hot flashes with the decreased dose, I went back to my doctor. She told me estrogen replacement therapy may be associated with an increased risk for breast cancer and because my daughter had breast cancer, she could not in good faith increase my dose without my seeing a genetic counselor. Soon after, I met Peter.

My family and I are lucky to have a good genetic counselor like Peter available. He has spent so much time with us, helping us to learn more about breast cancer and genetics, to understand our family history and our individual risks, and to think about the implications of genetic testing. After meeting with Peter, I decided to go through gene testing for breast cancer and yes, I was found to have changes in a breast cancer gene. I was prepared for this, not only because Peter had talked with me about the possibility, but also because my sister and daughter both had breast cancer. I guess I already assumed that I had to be “the link”. Peter helped me to understand that having changes in this gene means that I am at increased risk for getting breast cancer (not that I will definitely get breast cancer). What next? Peter talked at length with me about options. I decided to have surgery–a double mastectomy and oophorectomy. As with any major surgery, I knew there would be risks. But at the time, I was healthy. I didn’t have cancer. If I waited until I was sick with cancer, then I also might have to face chemotherapy and/or radiation. To me, that was scarier than having the surgery. Because of the “genetic” nature of this information, I felt I needed to contact other family members. With input from Peter, I sent letters to immediate family members and first cousins on my father’s side of the family (the side where all the breast cancer was found). The person most impacted at the time I sent the letter was my sister Barb’s daughter. My niece told me, “All of my adult life, I have been unable to impress on anyone the concerns I have about getting breast cancer and testing for it. No one wanted to do mammography because I was ‘too young’.” Finally someone would be willing to listen to her concerns and help her find out whether she had the same gene change that led to her mother’s breast cancer. My niece was tested. She wasn’t surprised when the results came back indicating that she too carried the gene change; she had, in her own mind, always assumed that she would. Surgery (a double mastectomy) followed. Since all of this, my niece has had more peace of mind than she has had ever since her mother’s diagnosis. She knows she is not “home free,” but she feels this information has helped her to do something to cut a major risk factor by a huge percentage.

Deciding to go through genetic testing is not easy. While test results may provide helpful information, there are other concerns–cost, insurance, discrimination. Different members of my family have made different decisions about whether to test or not to test. We know this is the way it should be . . . it’s a very personal decision. It has been reassuring for all of us to have genetic counselors to call upon to discuss these issues.